You are here: Home » Recommended Books 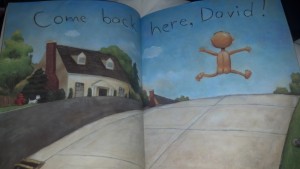 Kristin Wilson is a stay-at-home mother of two preschool age girls (3 & 4) and believes a child can never read enough books. She looks for books that make her children beg for more and enjoy so much they start to recognize the words on the pages. These are the books she chooses/will choose to share with other parents, children and teachers.

I pick, No, David! I bought this book based on it’s title alone and later found out it was a Caldecott Honor Book written by David Shannon.  When I first read the title, I immediately thought about my feisty little 3-year-old, Dani, who while I am typing is running around the house trying to scare her sister – screaming, kicking and giggling despite my orders to “stop!” and “use your inside voice!”

No, David! is a funny story-turned-series of books based on something a man drew and wrote when he was a kid when the only words he could spell were “no” and “David.” It depicts a little boy getting into all kinds of trouble and his mother’s two-word responses (and sometimes more). It’s even funnier because most moms and dads I know have responded the exact same way to the exact same actions!!

This book was such a surprise! We laughed so hard at the great illustrations and the familiar demands by little David’s mother. “Let’s read No, David! mom,” I have heard it five times today already (instead of asking to watch Peppa Pig or Paw Patrol on TV).

Anything that makes my kids want to read over and over and over is enlightening in my “book” (pun intended) and this one is no exception. Our favorite part is mid-story and illustrates little David running naked down the sidewalk. We giggle and giggle and giggle. What a beautiful story! And in the end, David learns that even though he’s a bit naughty, his mom still loves him. That’s kind of an important distinction in my home. Discipline doesn’t not mean a lack of love … as you know, but your children may not fully understand. I highly recommend this wonderful book (ages 3-6 tested).
* What kinds of things did David do that you sometimes do?
* When his mommy said no, did it mean she didn’t love him?
* Why did she say no to David?

SIMILAR BOOKS: Betty Bunny Loves Chocolate Cake by Michael Kaplan (& others in the Betty Bunny books), for younger kids there is the Diaper, David series by David Shannon called Oh, David: A Pocket Library and they are board books for the very little ones.