You are here: Home » Rescue Dogs 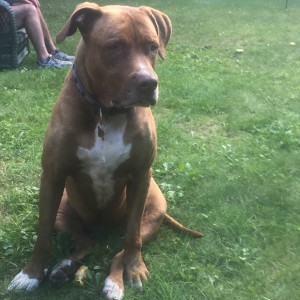 EMA, Tortorella ’s beloved  family dog, recently passed from an aggressive lung cancer. Ema was not just a member of their family — she was an inspiration for many of their own rescue efforts and their support of animal rescue groups in need of support.

Ema was adopted by John and Christine Tortorella’s son, Dominick, from Fort Lonesome, Fl. She was the family’s first pit bull and so their love of the breed began.  While being involved in various rescue activities over the years, the understanding of how  the breed has been so seriously mismanaged and misunderstood, came to light after Ema joined their family.
They’ve never looked back. And now their foundation has worked with rescue groups, promotes humane education and has initiated and supported programs dedicated to the humane treatment of animals.
John Tortorella, head coach for the Columbus Blue Jackets of the National Hockey League, was selected to coach the Metropolitan All Star hockey team in January of 2017. Coach Tortorella declined the invitation to the All Star game when he learned Ema had terminal cancer. Tortorella needed to be there for his family, and most importantly Ema, in her final days. During the All Star weekend, news of Tortorella’s absence connected with animal lovers all over the country (and Canada), who made donations toward the foundation — some in honor of Ema, and some in honor of the Tortorella’s son, who is serving in the military. For these thoughts and donations, the Tortorella family and foundation is truly touched.
“Your thoughts mean the world to our family,” Christine Tortorella said. “We are very aware that we are among many many people who grieve the loss of  their pets..  And we will be even more dedicated to improving the lives of animals in crisis.”
The Tortorella family will match these heartfelt donations made in Ema’s honor — which were almost $1000, and use the funds  in a rescue program in the community that will make an important difference in animals lives.  More information about where the funds will be used is promised soon.
0 Comments/in Animal News & Events, News & Events, Top Story /by KWilson/#permalink
February 27, 2017

ADOPT ME? Bobo is a smart & gorgeous 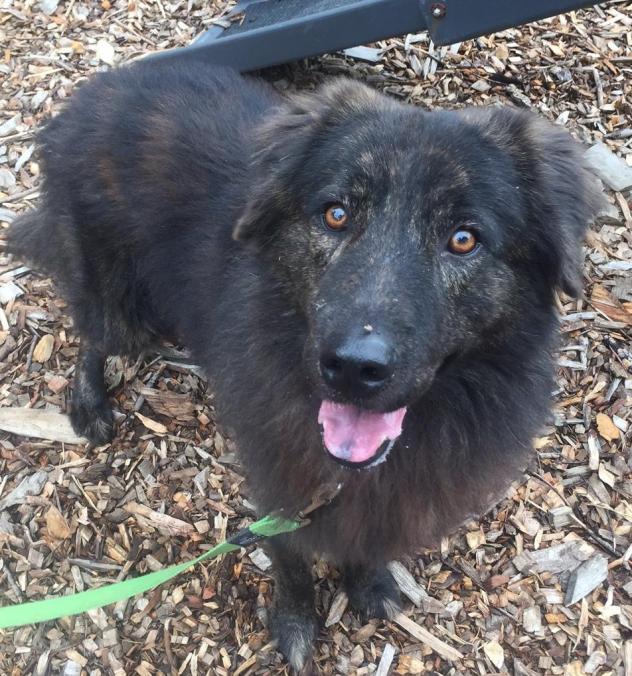 Bobo is a 2-year-old brindle retriever is a total stunner. He’s a smart guy who’s very friendly, he just likes to take his time and get to know people slowly since he’s a little on the timid side. He gets along well with other dogs, and the SPCA of Westchester thinks he’d be happiest in a home with a calm, well-adjusted dog to pal around with. He’s a good fit for older kids (16+) who understand he’s a mellow kind of guy.

To learn more about Bobo or to meet him, e-mail trainer@spca914.org

ADOPT ME? Are you the “Lucky” Family? 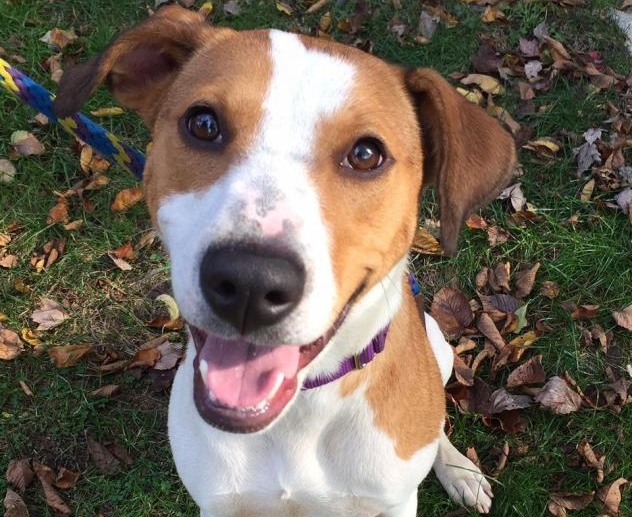 Lucky is a happy, young girl who always has a smile on her face. She loves people and other dogs (but doesn’t want to live with cats). She’s friendly, playful and energetic. She’s about 1 year old but still has a lot of puppy energy and is working on her basic obedience. She’d be a good fit for kids around 12 and older (she loves kids, but can be jumpy and might knock little ones down). Lucky would be happiest in a home where someone is around part time. Please e-mail trainer@spca914.org to learn more about this great girl!

ADOPT ME? Triscuit is Looking for an Active Family 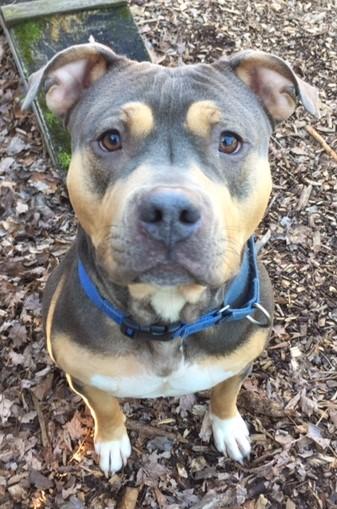 Triscuit is a sweet, mush of a dog. Triscuit came in as a stray and instantly won everyone’s hearts at the SPCA of Westchester over with her gentle nature and outgoing personality. She’s a big girl, but thinks she is a lap dog! She is a young bulldog mix that would love nothing more than to find an active family to give her all the TLC she deserves! Email shelter@spca914.org for more details.

ADOPT ME? Boris is Off-The-Charts Friendly! 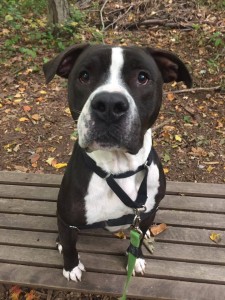 Boris is a 2-year-old Terrier mix boy and is off-the-charts friendly and equally smart. He’s got puppy dog eyes that will melt your heart! Boris is not a fan of other dogs, so he’d like to be your one and only. And he’s a big guy, so bigger kids around 16 and older would be a good fit for him. To learn more or to go meet Boris or e-mail the SPCA of Westchester at shelter@spca914.org. 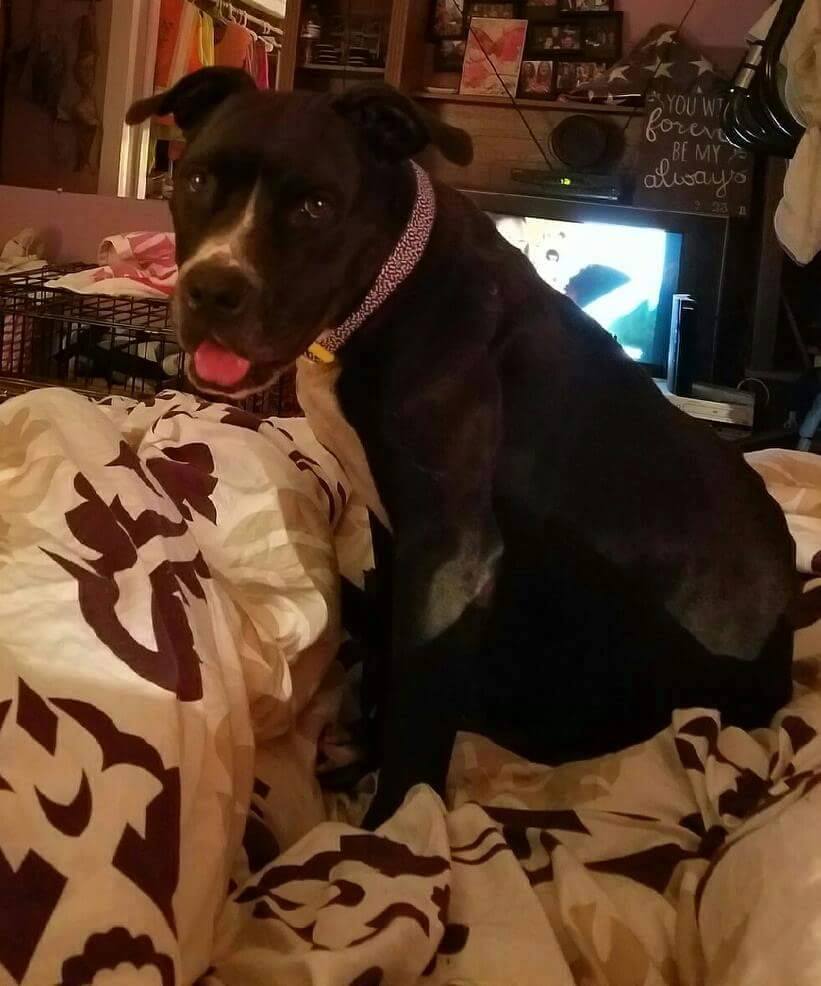 In her 2 short years (maybe less), Roxy was bred and left outside, alone, on a chain with a mostly empty, dirty water bowl and some food when the neighbors felt safe enough to feed her.

This, it is believed by rural NC rescuers, is why her “owners” were not charged with neglect. She had an empty blue barrel thrown next to her for shelter — and that is enough in some places in NC. Roxy, a pitty, was picked up by animal control and brought to a kill shelter at the urging of neighbors and local rescuers. That shelter tried to return Roxy to her owners, who had moved out of the location at which Roxy was rescued weeks (if not months) before Roxy was picked up. When that failed, Paw Project was able to rescue her. She had heart worm and needed to be spayed.

The Tortorella Foundation, through the Bear’s Angels Program, offered to sponsor Roxy’s medical expenses. She is already on the road to recovery due to the love and care of Paw Project!  For more information about Roxy, visit pawprojectnc.com/adopt/ and ask about Roxy.

She is house trained, crate trained, good with other animals, and loves everyone. Living in the woods, abandoned and neglected, has thankfully not destroyed this girl. Her owners let her down and animal control let her down, but our volunteers saved her, and we want her to have the loving furever family she deserves! She is in the middle of heart worm treatment, which could take months. 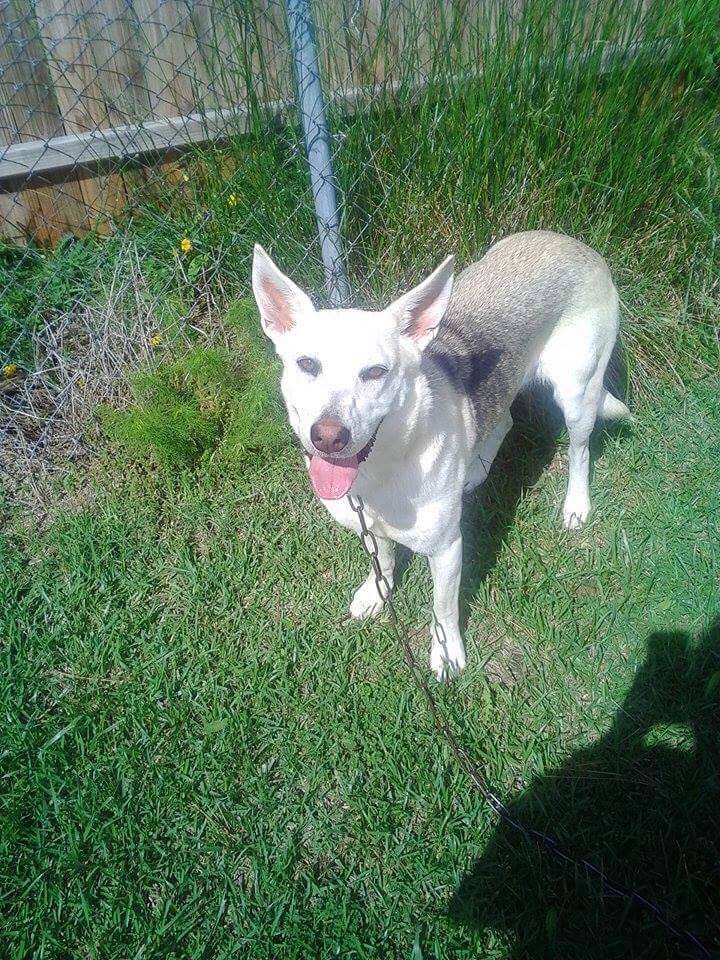 Valentine is a 2-year-old rescue from a rural shelter in North Carolina. She was so shy and timid on the “adoption” floor, they were going to euthanize her. She had heart worms and was treated for them and had come a long way with her comfort with her foster family. Then, suddenly they had to rush her to the emergency vet who diagnosed an obstructed bowel that would surely kill her if left unattended.

Adopt Me Animal Rescue out of Madison, Wisconsin opted for the surgery despite it’s $3600 price tag. The asked for help from the Bear’s Angels program at The Tortorella Foundation. The foundation offered to match up to $500 in donations toward Valentine’s medical bills.

She had the surgery and is doing really well – almost 100% back to normal, they say. But the bills remain. Please consider donating to Valentine’s cause so Adopt Me can continue to help dogs like Valentine. Donations can be made through our BearsAngels.com link or to adoptmeanimalrescue@gmail.com via paypal. 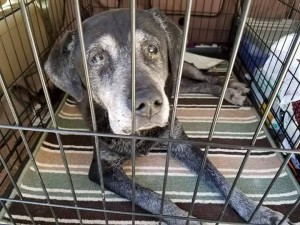 Willow is a 10-year-old senior girl who was rescued by Dogs of Destiny, the Virginia Chapter of Lake Charles Pitbull Rescue. When “Destiny” rescued her, she had pressure sores on her feet and elbows, renal disease and was in rough condition. But that didn’t get this sweet girl down – she loves to snuggle and get belly rubs. Her condition now requires eye drops for chronic dry eye and medicine for her suffering kidneys. She also requires special, and likely expensive, food.

The Tortorella Foundation, through Bear’s Angels, has offered to match up to $300 in donations to help Willow live a healthy life with proper medical treatment. To learn more about Lake Charles Pitbull Rescue, visit lakecharlespitbullrescue.com. To help with Willow’s medical needs, you may donate via paypal to rescuedbybullies@gmail.com

Dixie Hit By a Car – Paw Project To the Rescue! 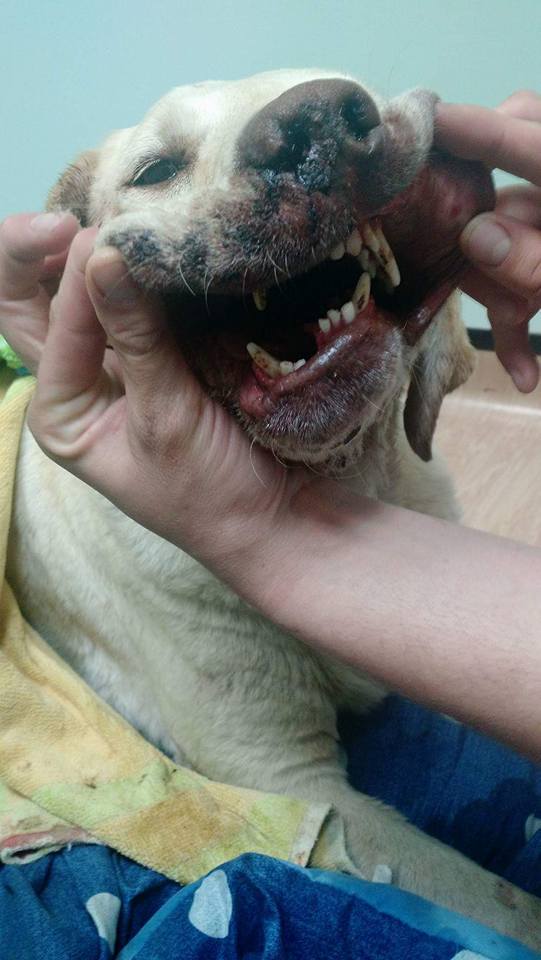 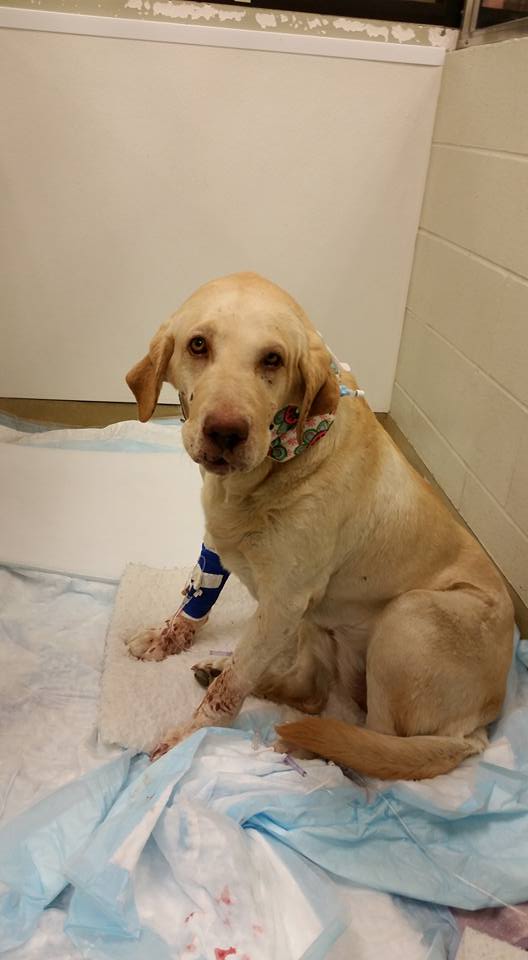 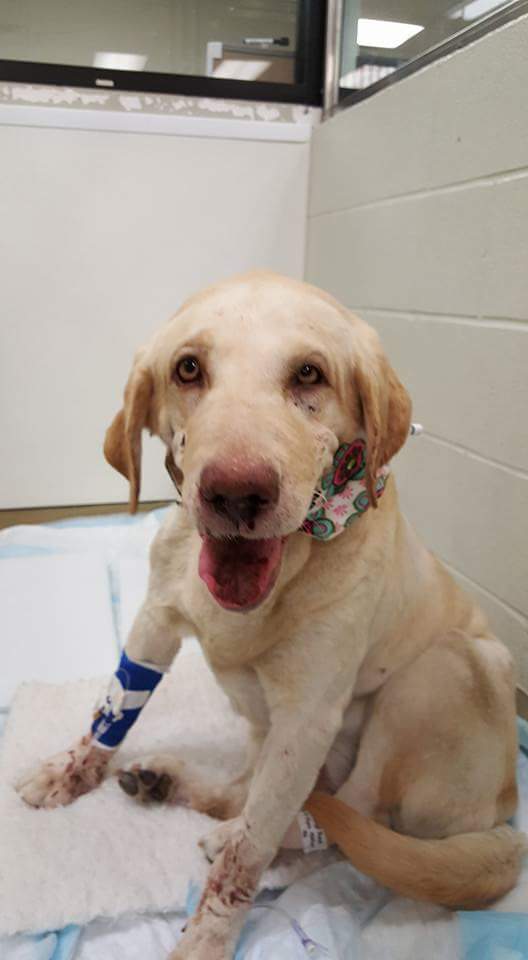 Poor Dixie was hit by a car last week, and the woman who found her reached out to the Paw Project in North Carolina. They took her in when her owners opted not to take her back and take on the mounting medical bills. Upon first X-rays, the veterinarian estimated surgery costs around $2,000. But upon further scans, they found Dixie had fractures on her jaw, mouth, nose, skull and a hematoma on her brain requiring almost $6,000 in vet bills. She received the surgery, but this small rescue needs as much help as they can get. The Tortorella Foundation has offered to match funds up to $500.  Visit  pawprojectnc.com if you think you can help financially or otherwise.

UPDATE  ON JULY 1, 2016!! Dixie is healing and has found a loving home! Here she is with her new “forever home” … Dixie is a foster failure and is doing great. 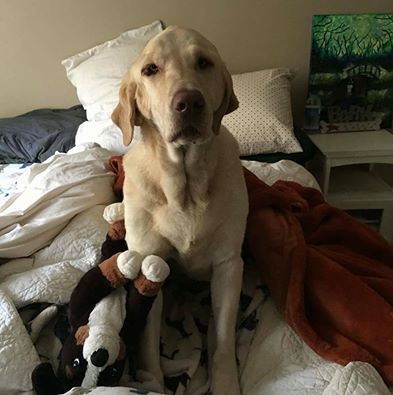 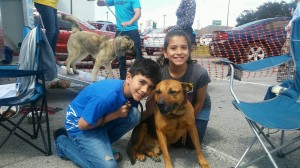 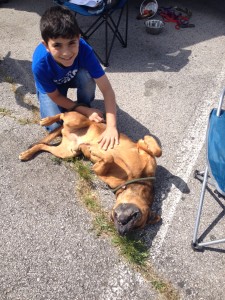 “This is amazing! How a network of people from all over came together to help Rusty. That there are people like you who dedicate their lives to helping dogs live a happy, healthy life. Your generosity is greatly appreciated.”
The Tortorella Foundation would like to Thank the Wallace Family for not giving up and fighting to keep Rusty a part of their family.
To help dogs and cats like Rusty, please consider making a donation to Bear’s Angels.
0 Comments/in Animal News & Events, Bears Angels, Blaze's Friends, Top Story /by KWilson/#permalink
Page 3 of 8‹12345›»